The energy balance and planning tool for efficient buildings and refurbishments

The PHPP is an easy to use planning tool for energy efficiency for the use of architects and planning experts. The reliability of the calculation results and ease of use of this planning tool has already been experienced by several thousand users.

The PHPP based on Excel was introduced for the first time in 1998 and has been continually further developed ever since. Calculation sheets for space heating balances (annual and monthly methods), and for heat distribution and supply as well as for the electricity and primary energy demand, constitute the main features of this tool. Essential modules were successively supplemented for the practical planning of energy efficiency projects throughout the world, including the calculation of characteristic values of windows, shading, heating load and summer behaviour, cooling and dehumidification demand, ventilation for large objects and non-residential buildings, taking into account of renewable energy sources, and EnerPHit certification (retrofitting of existing buildings). The PHPP is continually being validated and extended on the basis of measured values and new research findings.

In the context of accompanying scientific research in several objects, measured results were compared with the calculated results. In the process, a high correlation could be demonstrated between the demand calculated using the PHPP and the consumption ascertained through scientific monitoring projects. With careful planning of building efficiency, there will be no performance gaps. 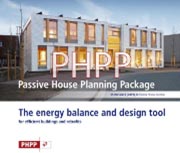 A special version of Pasive House Planning Package allows the complete data input based on the imperial unit system. The IP-PHPP was developed specially for the North American market where this system is used by numerous designers and architects. Entering project data for Passive House buildings, EnerPHit retrofits or other highly efficient buildings is thus greatly facilitated.
As in the standard version of the PHPP, the IP-PHPP comes with an import/export interface which enables data transfer from one IP-PHPP to another. In addition, an export macro prepared by the Passive House Institute has also been provided – which allows data to be exported from the IP-PHPP into the metric PHPP.
IP-PHPP users can also enter their projects in 3D with the SketchUP-plugin designPH, before refining the data in the IP-PHPP.

The advantages of the Passive House Planning Package 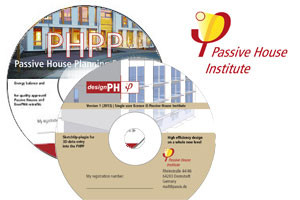 System requirements for use of the workbook

The PHPP is based on an MS Excel workbook in the xlsx/xlsm format. Microsoft Windows XP (or higher) and Microsoft Excel 2007 (or higher) are system requirements. As far as the authors are aware, the PHPP can also be used with current versions of OpenOffice or LibreOffice, on Linux systems, and on Macintosh computers. However, depending on the platforms used and their programming, there may be limited functionality of the calculation tool or the macros of the additional tool.